As always I have a hard time getting back into blogging when it has been a while. I miss it but as usual time and mostly energy has been working against my blogness. Still is. We are leaving for Hong Kong tomorrow so there are things to be done. But I figured I better go on vacation without blog guilt. It will a real vacation. NO work. Hopefully I will get my dose of photo action and other than that we just plan to get as much hang time with Nick aka Electric Pick as possible. We are looking forward to see this place of his that stole him away from us. So no fresh tattoo shots from Hong Kong but hopefully the photoblog will boom when I get back.
Let's go back in time a bit. Let's catch up, shall we?
Friends have been visiting. Good times. Last it was Joey Ortega who was scheduled to get tattooed by me so we figured that he might as well just stay a bit a do a few tattoos. It was cool to have him and hang out a bit outside a convention.
I have been starting a bunch of cool new pieces but I rather wait until I have finished photos before they go up here. Many has made it to my Instagram though so if you are an Iphone user get Instagram and find me there. I'm Unclea.
Since the sun started to appear I have been listening to a lot of metal. I think I have mentioned that in the previous post. That has opened a big heavy wooden door of inspiration that has started to show on my drawing table. It looks like there will be 3 or 4 new tshirts coming in a hopefully near future. I still need to find a place that can print them.
The last post also showed one of my new Black Metal paintings. The response to it has been really awesome and since I had fun doing it I have decided to make a whole series of them. I have just got the biggest inspiration to the project in the mail but more about that later.
All this metal has also ment that Mr. Dettmer and myself once again will team up at the London convention and have decided to stick with the Metal theme. We will see what crazyness that will lead to. But before you guys start emailing me about appointments please read this following text:
I will make a set of flash sheets made specially for London convention. There will be a theme...yes...it is METAL. I am planning to show a sneak peak when we get closer to the convention and when I have actually made some. There will be NO APPOINTMENTS!!  ONLY WALK-INS!! First to booth, first served. No reservations if I can help it and there will be no customizing of the pieces since I will have everything ready including stencils. All pieces will be up for grabs one time. When they are tattooed they will no longer be for sale.
Don't worry, I will get back into details again later.
Ok I know there is so many things I wanted to share and stuff but while I am sitting here writing, printing tickets and stuff time flies so I better start thinking about what to bring to Hong Kong. Sorry!
Hope to be back soon.
Ohh..wait... Pictures...there is pictures of tattoos...
Ok quick one.... random order... 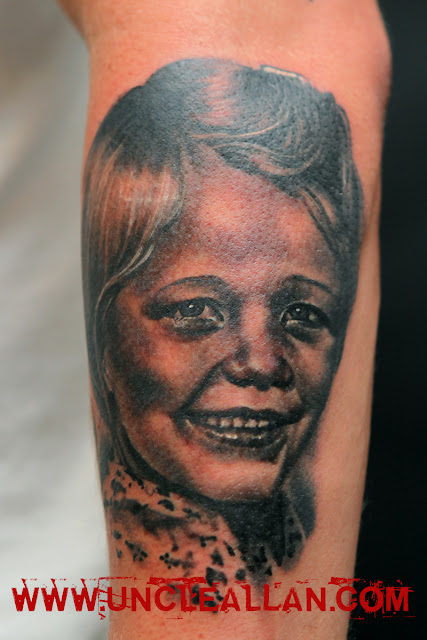 Jon got a tattoo of his mom as a young girl. I hope I can catch a good healed picture later...at a better angle... 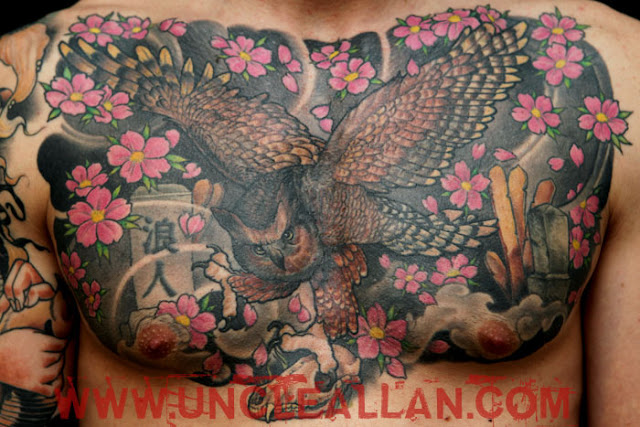 Martin dropped by to get his chest shaved and a healed picture taken...well a picture taken of his healed tattoo. 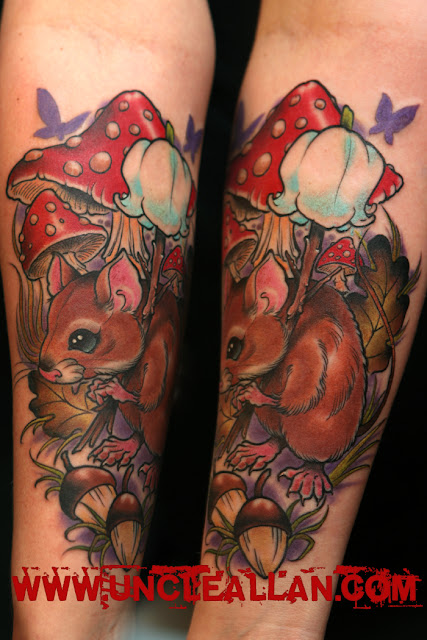 Rikke B finally got her appointment so she could get a tribute to her grandma who called her mouse and made mice umbrellas out of her favorite flowers. 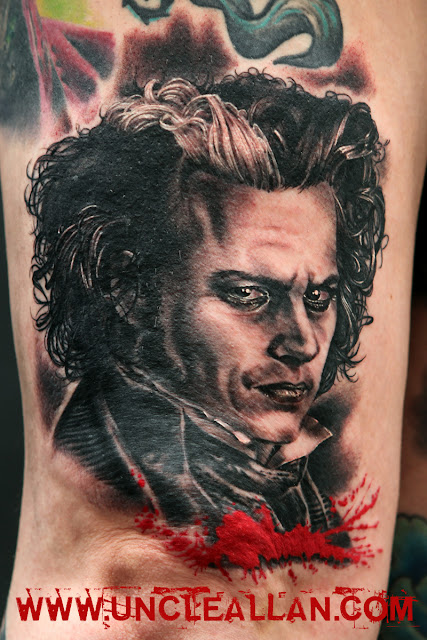 Sarah came back from England to add a Johnny Depp to the collection. This one from Sweeney Todd. Hopefully I will get a healed photo of that one as well later.
Ok that was it for this time. See you soon
Posted by Uncle Allan at 11:06 AM 6 comments: 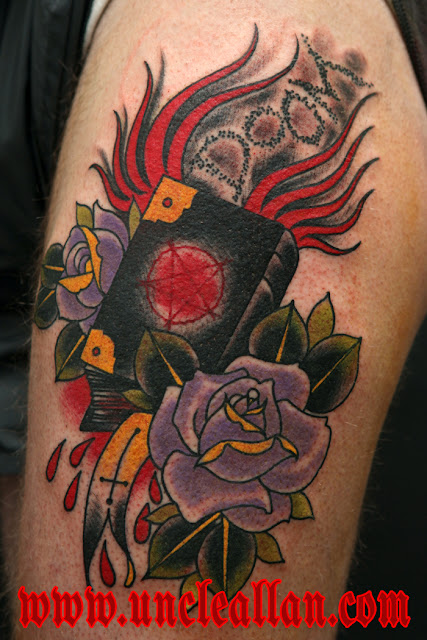 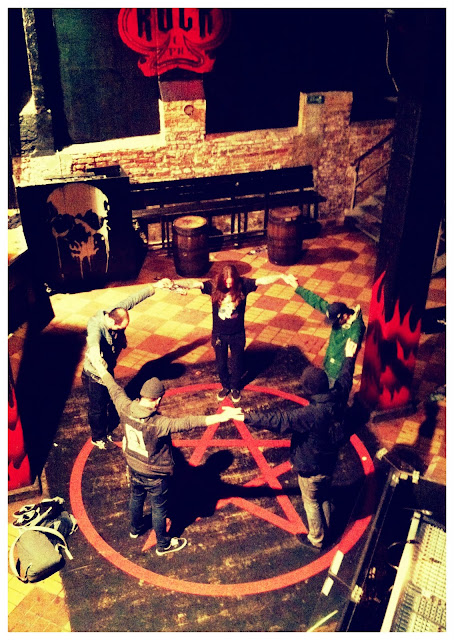 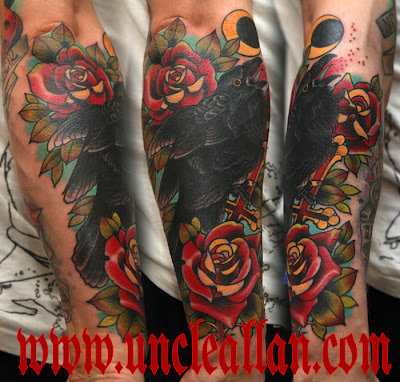 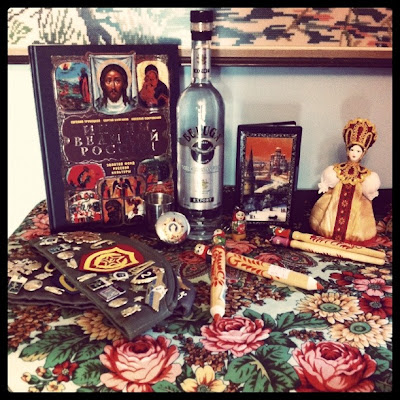 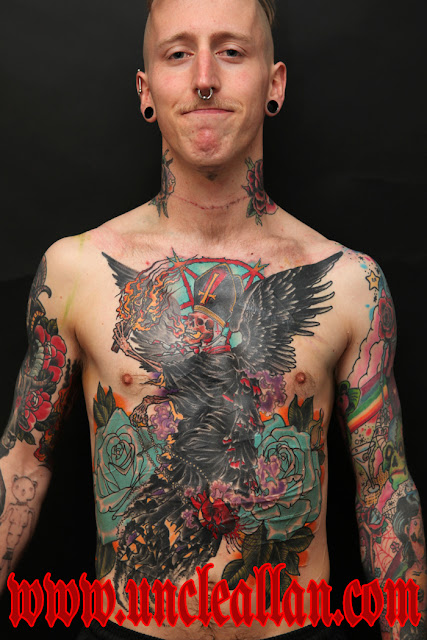 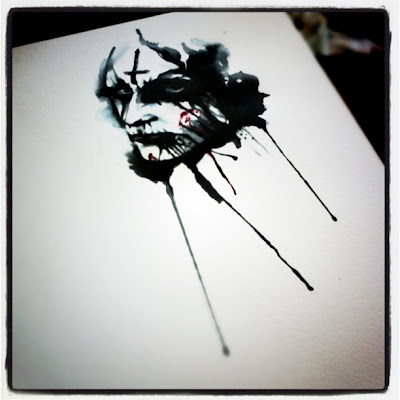