Just got back from this years London Convention. A great and busy weekend in good company of friends that we only get to see a few times a year on events like this. That is one of the best things about these conventions, getting to hang with our friends from all over the world. This year we hung with the Uk, Germany, Japan, USA and Sweden. Pretty international if you ask me. Good to see you all again!!

Me and my trusty convention buddy, Chriss Dettmer had prepared a whole bunch of new merch for this convention. It was a big deal for Chriss who the first conventions we did together didn't even have a banner, businesscards or portfolio... not this time!! He had EVERYTHING! Stickers, postcards, many different tshirts, flash, prints and portfolio. Too bad that people wasn't in a big shopping mode as they were the last couple of years. We still sold pretty good but there is still some of our limited prints and shirts and also my new antler lady print left. I will post a blog post about how to buy them and prices and stuff soon.

One thing that really really sucked about this weekend was that we were a lot of artists that was under the impression that the convention was closing late every night...well that was only the bar and the convention closed early like always. This mend that I had to cancel 2 appointments because I wouldn't have been able to finish in time. This really really sucked and I do not like to not be able to keep appointments like this. I hope I do get to do these 2 pieces sometime in Copenhagen and make it up for this.

So here is a the tattoos that I did...eccept for one that didn't turn out so well on the picture...an awesome ape it was...sad...but here is the rest. 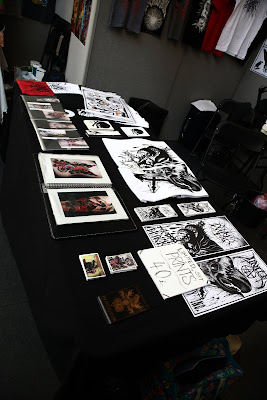 The booth from HELL 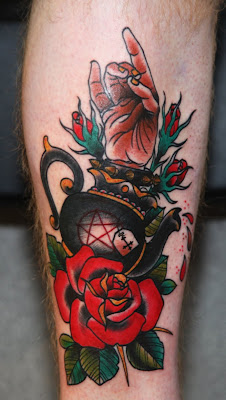 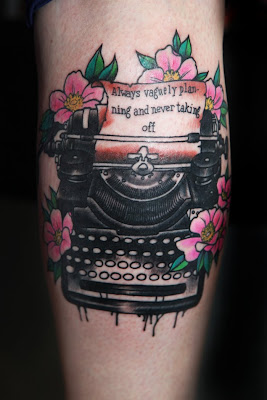 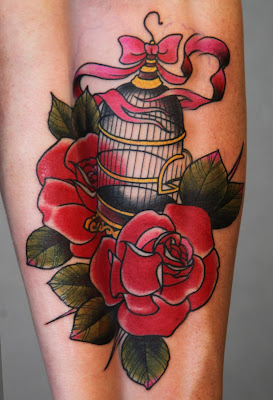 This years London Convention was supposed to be the big xmas party when it came to merch...and it still will be BUT one of the bigger "presents" will be missing. We were supposed to have the skateboards that Chriss Dettmer and I did for Substance Abuse for sale at the convention but things got screwed up and it was too late. There will still be prints with the awesome designs and tshirts (buddy shirts that will form the skull when you guys stand next to each other) and my new satanic antler lady plus free stickers and new cards and shit so there will be stuff to spend money on.

For those of you, who are within travel distance of the shop, there will boards for sale at the shop later on when we figure out how many to get. If any of you want to reserve a board to make sure to get one then please let me know. Same goes if you want both boards, let me know because I won't get as many Chriss boards as my own so it would be nice to have an idea. So until further notice please let me know if you wanna reserve one. You can leave a comment or write to my mail at onkelallan@gmail.com.

For those of you, who can't drop by the shop and buy one you can order it through this page.

More merch news and stuff soon. I am a bit busy working on getting everything ready for London and have also been trying to get as much done on my dirty antler ladies...2 almost done! Keep swinging by!!
Posted by Uncle Allan at 3:54 PM 6 comments:

It surely was about time that we finished this piece started almost a year ago. Well that's what happens when both the customer and the tattooer is busy all the time. We might come back and add a bit here and there when he decides what to get on the inside, above and next to it. 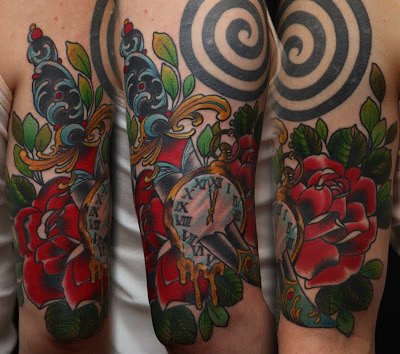 A big congratulation (in advance) and good luck with the baby!! When ever it happens. All the best from us!!


This next piece took a bit longer than we had expected. The first two sessions were really tough and frustrating because he bled a lot...really!! The session where we did all the black shading was a battle against the blood. In the end I had to throw in the towel after a way to short session and leave it with only black shading. That was why I was a bit concerned before this last session. For reason not clear to me we managed to put in all the rest of the colours...almost 7 hours and therefore a new trooper is added to the HALL OF FAME. Good job!! 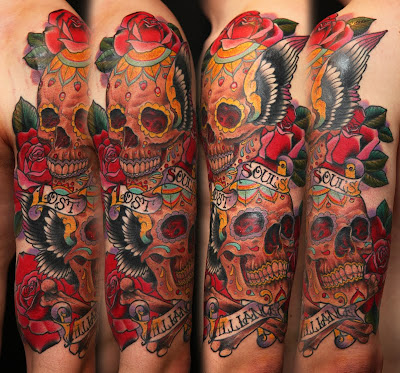 They are here!! They are finally here!!! The skate boards from hell...or from me and Chriss Dettmers desks. The boards that we have designed for Substance Abuse is ready to buy HERE. This is actually the design that we made for our split banner for the London convention this year...ok ok I will post my original design later in the post! 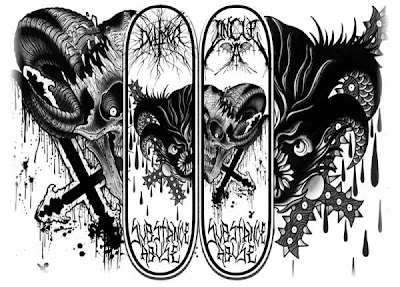 The decks from hell!! And you don't even have to pay with your soul!!

Well this will also be made as tshirts and prints. Both only available in pairs so you will get the full Uncle A/Dettmer effect! 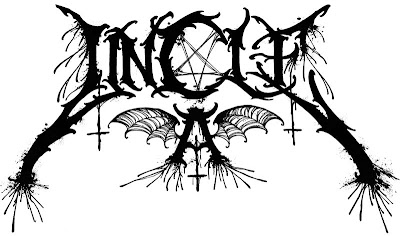 The new and evil Uncle A logo that will be found on the back of the new tshirt.

If everything goes as planned we will have a few decks for sale at the London Convention, signed and everything. The prints and shirt should hopefully also make it there in time!! Fingers crossed. So save your money and come and spend them on our crap at the convention.

My painting and half of the banner for London.
To end this evil post of goodies...here is Youngs birthday rockin' Unicorn. 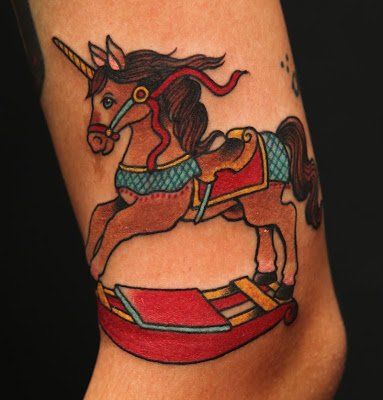 As promised I bring you a little taste of what I am working on. Now this isn't for kids.
If everything goes as planed these young ladies will be made into a set of prints and hopefully sooner than later. I realize that I might have set this goal a bit to high to follow through...BUT...I would love to have them ready for the upcoming London convention. Well the drawings are done and hopefully tonight at least one will be inked onto paper, ready to get coloured.

I will keep you posted on the progress of these horned ladies.
Now go listen to Slayer or something.

Friday and Monday both were skate tattoos. Turns out the guys were friends too. 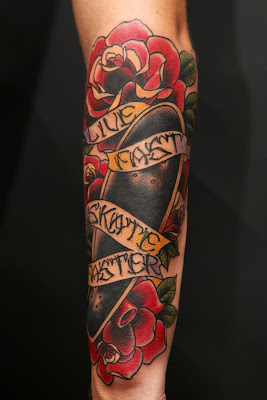 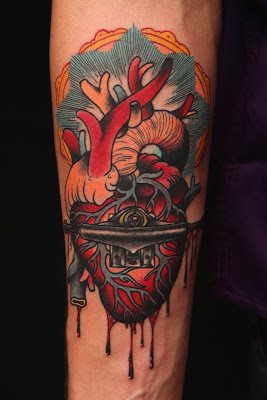 The light turquoise got a little dirty looking in the end. Hope I will get a better picture later.

For those of you who will be attending this years London Tattoo Convention there will be good reason to save up those hard earned money because there will be plenty of new merch delights from myself and my convention partner Chriss Dettmer. We have made a split banner (two banners where we have made half of a design each) that we will have as a limited edition print of 50 sets, hand numbered and signed. You will have to by the set so you get the whole deal as it is supposed to be seen but it will be worth it. These gems will be printed on nice heavy watercolour-like paper to make it all fancy and delish.
We will also have these designs as tshirts. This too will be sold in sets so you and your friend can stand together and make the design come together as it was supposed to be seen...and it will bring you and your buddy closer together!!
As if that wasn't enough then we have gotten a skate board company, Substance Abuse, to print them as skate boards! They look freaking raaad!!!
As mentioned before then I will have the first antler lady print ready for London as well. The little Satanic antler lady and her lamb will be printed on nice thick heavy paper as well and there will only be printed 60 of her. All hand signed and numbered. My plan so far is to bring 20 to London and the last 40 will be sold from the following week at the shop and through this blog. So fear not bloggers from around the globe, you will get your chance too. More Info about how it will go down later.

I will post pictures and prices later when I know more so no reason to write about it yet.

Also... I am working on some more new paintings. I have a bunch lined out but am still trying to figure out how dirty to go on these antler ladies. Let's just say that they don't have that much clothes on and they like to explore their bodies...hmmrr hmrrr... I might post a few sketches tomorrow since it is my drawing day off. Anyway...if everything goes well they might get in the mix of prints as well while I am at it. 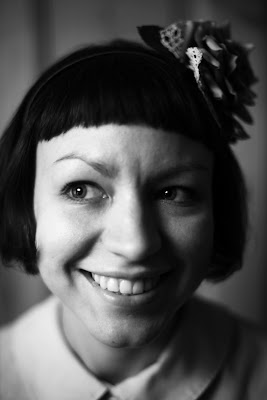 Last Thursday Amalie and I could celebrate our 8 year wedding anniversary. We had the best day at home just hanging out and doing stuff...tried to keep the work stuff to a minimum. Later Amalie had prepared a surprise entertainment of the evening. We are both a bid whale crazy these days so when it turned out that we were gonna see a movie about whales and dolphins...in 3d then that was just perfect for a geek couple like us. After the movie we went out to eat at an Italian restaurant where there is only one menu a day. A whole bunch of starters of all sorts, original Italian tomato soup, pasta, main dish and desert... delish. After all that food we ended up on the couch for some more hanging out...Perfect day!

Due to more busy days without any time to blog, here is a sum up of the last couple of days tattoos.

We went to work on Sunday since our good friend Kapten Hanna was in town. She were kind enough to make the most majestic Swedish unicorn on Amalie. Go check that awesome thing out here.
After she was done tattooing Amalie it was my turn to return the favour and I do so by putting her two dogs Bela and Wednesday on her arm...I know it is really crazy how much it looks like photographs but I promise you that it is tattoos. I get confused myself by how realistic they look!! 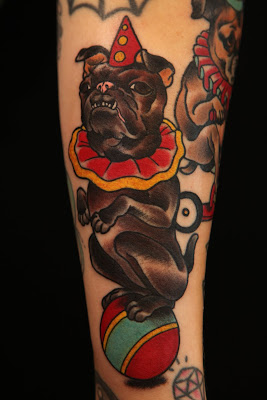 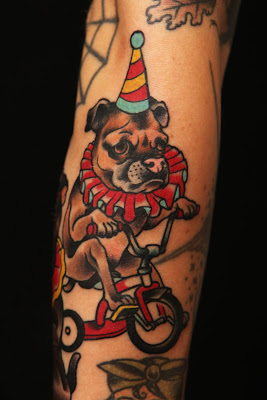 Monday was also super realistis animal day. Just look at them!! It is like she has real birds on her thigh!! Crazy. 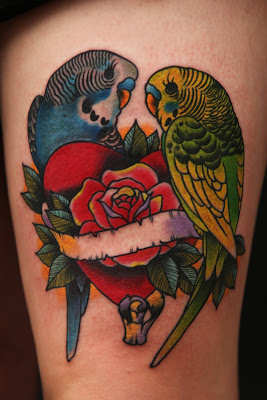 Today I got to finish this little Dali inspired piece. Well I know there isn't that much Dali left but that was the main idea to begin with. 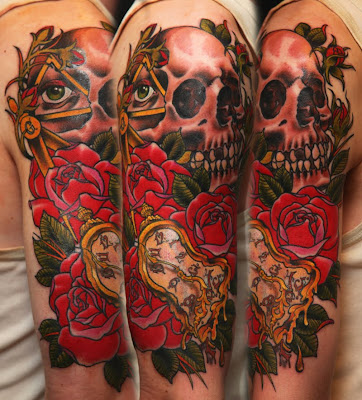 Tomorrow I might be able to post some more news about merch and stuff!! Interesting news!!!
Posted by Uncle Allan at 2:26 PM 4 comments: