Hello again my good blog readers. As always I would like to apologies for the absence from this here blog. It hasn't been because of the lack of time (well, also that) but more the lack of stuff to post. I have been starting a bunch of pieces but not finishing a lot and some that I have finished have not been ready for their photo so today I will bring you the one finished tattoo that I did get a picture of.

Mr. J. Bram is a pinstriper and graphic designer. I have done a few tattoos on him already and this one was to celebrate the tools of his trade. The ohhhh so mystical art of pinstriping!! uhhhh...well not really that mystical but who doesn't like a bit of freemasonry sort of thing? 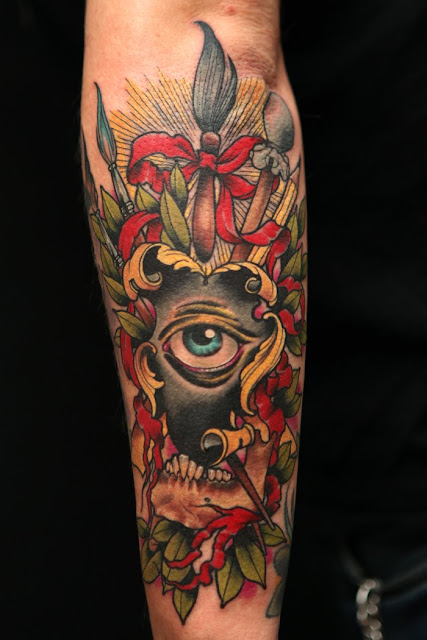 I have been working on some other projects but it is too soon to reveal any of it. I will keep you posted as soon as I figure out how much to leak to you guys.
If you wanna see some of the progress tattoos that I have worked on then follow me on twitter since I usually post them there.
I other news!! We have booked our tickets to Japan! From the 29th of March till the 7th of May we will be in the land of the sun again and back with our good friends in Tokyo at Ink Rat Tattoo. We are trying to put my work schedule together so let me know if you are thinking about dropping by Japan to get something done. More about that later.
Now...drawing!
Posted by Uncle Allan at 5:03 AM 6 comments: