Since it's not really the new year YET then first happy old year!!

Thanks too everyone who looks at this little blog of mine! Please keep dropping by!!!
I know that there hasn't been too much activity lately but that will change in the new year...that means in a day or two. I got 5 rolls of film that will be developed in 2 days!! 5 rolls of LOMO madness!! This will be the first picture we will have from the brand new Lomo!! Well I have gotten 2 films back already but they were more like pre tests but maybe a few of those will be among the next couple of posts I will put up when I get back to life in 2009. Also new paintings and news and stuff!!! So come back soon!!!

Xmas is kinda over but we are still in the countryside. Xmas was great with lots of lots of good food, family and amazing presents. One of them will be used here on the blog hopefully within too long. I good my granddads old camera that my mom got when he died. She knows how much I love to take pictures so she thought that I would use it well. It needs a quick visit at a camera shop since it hasn't been used for like 30 years or something so we couldn't get it opened. Everything is still working and the camera is in a really nice condition so after a quick clean-up it should be ready to hit the streets with me and the new black and white films I got from my brother.

My amazing wife got me a bunch of really cool things like a new bag and fancy shaving stuff and something that is beeing held hostage by the postoffice so that will have to wait till we are back in Copenhagen.

While unpacking all the stuff from Amalies parents (they moved down here permanently on the 21th.) I found the spots that I had been looking for among some of their things. Turns out that the spot that I wanted is actually a copy of the ones that Hans, Amalies dad, has and that they came from a factury that he worked on so he had a few lying around. I got myself two!! AWESOME!!! Can't wait to play with them. They give the best light for photos!

I also got 6 James Bond Dvds. One of the few things on my actual wishlist. We have already seen Goldfinger, You Only Live Twice and Diamonds Are Forever. Gooooood stuff!!!

Ok that is it! More updates later...what's that? Why there isn't any pictures? Well that is a good question. Although I have brought my Digital Canon and several lenses I have only shoot Analog while we have been down here. Felt more like it. So there is already 4 rolls of film ready for development...too bad it will take a week to get them back as soon as I turn them in!!! ARRRGGGGGGG!!!! CRAPPY COUNTRY!!!!!!

Anyway...maybe I will pick up the Canon and shoot some things! I kinda need to see some results.

Hope you all had a nice xmas too!!
See you all soon!
Posted by Uncle Allan at 4:58 PM 8 comments:

Java devil! You are now my bitch!

Todays sunday present was one very important tool for me. It's function is important for me and can determine the outcome of the rest of my day! 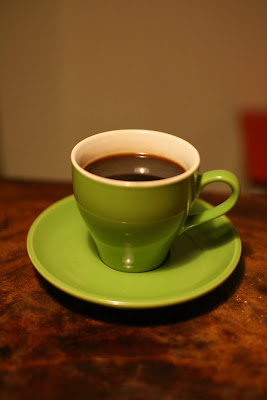 
Yesterdays work was a lot of fun. I have decided that it is time to change style so from now on I will be like the great masters of realism, Bob Tyrell, and Robert Hernandeeeeez (prince of tattoo). Mr and Mrs Ugle aka Thomas and Sussie came by for their boyfriend/girlfriend tattoos. As the horror movie fans they are they decided that their tattoos should be the Monster of Frankenstein (really not a monster...just a misunderstood shmuck) and his bride. Him on him and her on her 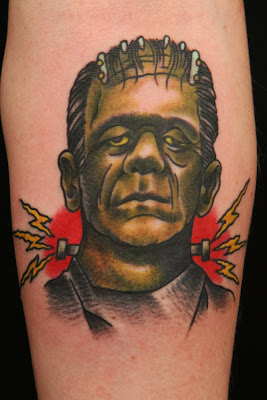 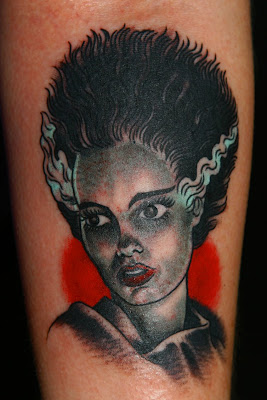 See how realistic it is!!! It's almost as looking at a picture!!! ..almost.


Ok...maybe I wont go all Bobby T from now on but I do like making these simple, traditional looking "portraits".
Posted by Uncle Allan at 5:47 AM 5 comments:


Last night I saw the scariest band in the world, DEADBOLT!! In a rain of sparks from the metal grinder (sorry I don't know the correct term for this kind of tool) followed by a mist of hairspray they started the show that hasn't changed a bit, and hopefully never will. Never have I seen a band smoke so many cigarettes on stage...they actually stopped a song to have a cigarette break!!
The air was filled with hairspray, smoke and flying cigarette buds. When ever the drummer (who played the entire show standing) were finished with his smoke he flicked it at Harley (the singer), who would return the favour after his next smoke. Shots were had and poison from a very dangerous rubber snake was flushed down like soda...crazy I tell you!! Kids... Don't try this at home!!
One of my favourite parts was when a bunch of crusty looking hippy types were standing in front of the stage yelling for them to play Watongo, a song about a god who kills dirty smelly hippies. One of Deadbolts trademarks is their hate of hippies and clowns so it's also a bit ironic that they play in the Hippy capital of Scandinavia, Christiania. Maybe they have made their peace. 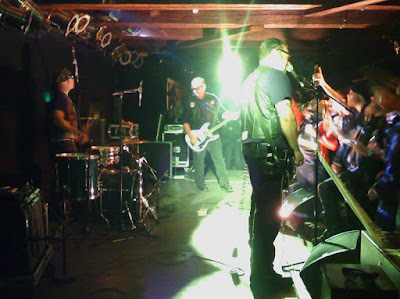 Iphone picture of the madness that is Deadbolt

It was a great show! The walk home for one and a half hour with my heavy, locked bike was not so much fun!! I lost my bike key somewhere so I had to carry it all the way home by lifting the back tire. Not what I had planed for my Friday night.

Today...painting action!
Posted by Uncle Allan at 4:00 AM No comments:

Amalie just showed me this video from one of our favorite J-pop stars...That's right, she is a Star!!
I have noooooo clue what this video is all about but words like insane comes to mind.

If you want more then go Here
Posted by Uncle Allan at 2:31 AM 1 comment:

Santa came early this year...in shape of a delivery man, but still.
With him he brought me a biiig box of Lomo goodness!!! Ok ok maybe, just maybe, it wasn't Santa...I might have bought it myself but they had an offer that I couldn't resist!!! Sorry honey!!
Well in this big box of Lomolisious goodies there was, among other treats, my new addition to my growing family of cameras:
The Lomo LC-A+ 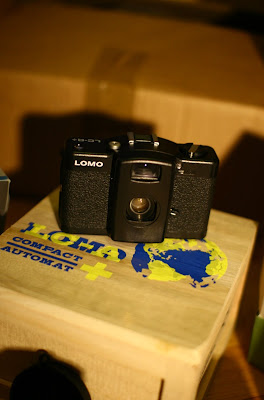 This little russian treat was made in the early 80's and is originally a copy of a Japanese camera. The Russians wanted to make a small camera that was as good as the Japanese but cheaper! Now I guess it is more popular than ever.
After many failures with my 35mm Holga I decided to give this one a try...Hope it won't let me down. But with it's many fancy functions it should be easier to get a result and not just roll after roll of nothing on it! I guess I didn't have the temper to work with the demanding Holga. But this little lady has the modern technology to take great pictures without too much thinking and that is what I like about this type of camera. Now I just have to shoot away and wait till I can get my rolls of film back from development!

Back to the box!
besides the beaut that by the way came in the nice wooden box with a book of tricks and a little book of other cool Lomo pictures, was a wideangle lens, a release cable (so expect a bunch of self portraits), two rolls of film, and the BIG book of LC-A+. The history of the camera and tons of cool picture and funny drawings. mmmmmmmmmmm!!!! Can't wait to play with my new friend!!! 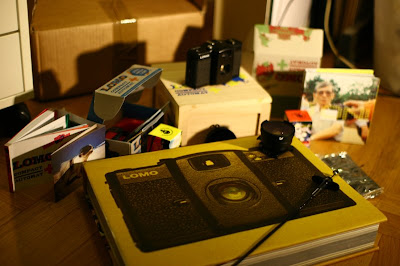 Lucifer has gotten an addiction to tearing giftwrap paper after now 11 days of playing with the leftovers from Amalies present calender. He takes the paper and runs with it and tears it to bit and pieces. So while I was exited about my new box of goodies he came and took the leftover Lomo paper. But it can be draining to tear all that paper apart. 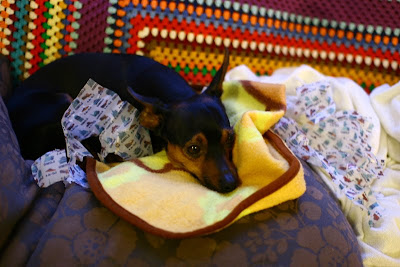 Lucifer enjoyed the Lomo-ness aswell.
Posted by Uncle Allan at 11:33 AM 4 comments:

My sweet sweet wife suprised me this morning when she had made me a xmas sunday present in a xmas sock and everything!! AWESOME!!! I like presents and candy and combine them...well you know ...again AWESOME!!! 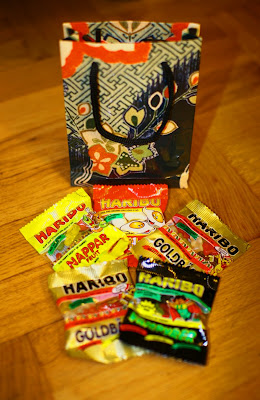 Holga 35mm with slide film. And should you find your self in Japan in need of slide film then just learn how to say the headline. That is how you ask for slide film in Japanese.

Here is Flora in Koenji close to our appartment. 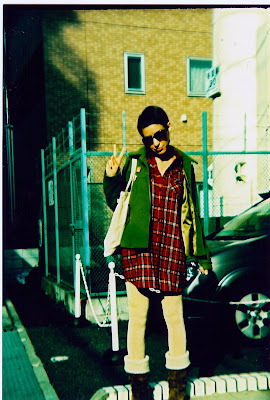 Posted by Uncle Allan at 5:06 AM No comments:

Labels: Holga 35mm, Japan, Photography
More Holga 35mm action. This is also from Osaka . It is the building that the Tattoo event was held at. The first picture is taken from the taxi from the last post. 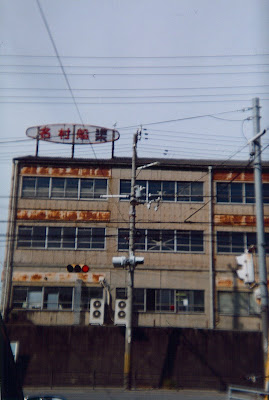 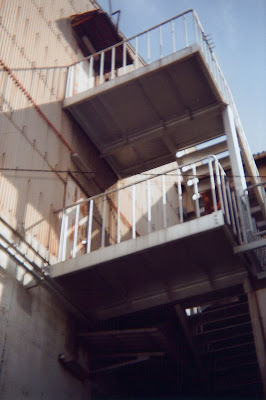 Hata and the cab

This is our friend Hata from Japan. We are in a cab in Osaka on our way to the Tattoo event that we worked on on our last trip to Japan. 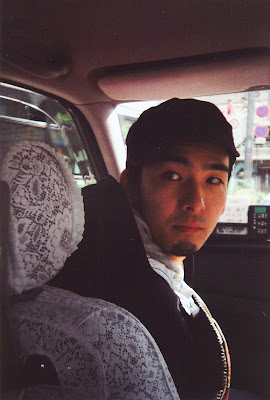 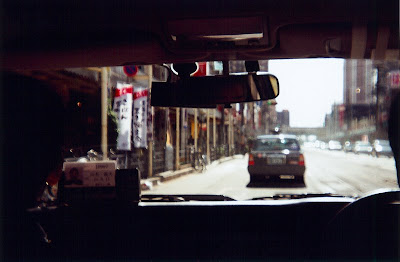 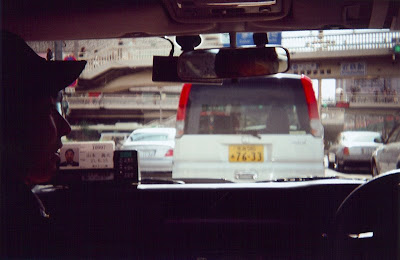 Posted by Uncle Allan at 4:45 AM No comments: 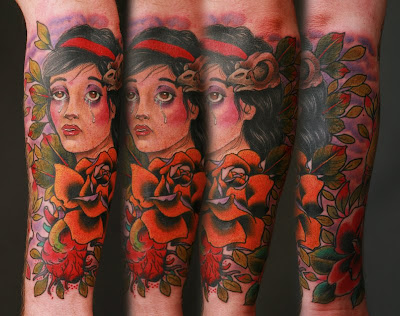 I'm sorry but I am too sleepy to come up with anything funny or clever to write. Damian here came back to finish his sad sad girl. We did all the lines and black last time so that is why the black looks a bit pale compared to the rest. That's it!
Looking forward to have you back, Damian!