All hail the pumpkin king

Here is another blogpost directly from my phone to you, yes you, right there in front of the computer. Wow right? Technology.
Anyway. If you follow me on instagram or twitter you already know this but we are having a Halloween day at the shop this Saturday. I have been working on a flash sheet that I will be tattooing from. No appointments or reservations and these bad boys and girls will not only be done once so if you have your eye on something the. Don't worry you will have plenty of chances to get it done. Thing is, on this special day it will be half price if you are dressed up. I'm not talking putting on a hat. We want to see some really well thought out costumes. So get dressed up and drop by the shop for some Halloween fun and cool tattoos by me and mr Chriss Dettmer who will bring his own sheet of scary goodness.
The fun starts at 1.
Hope to see you there. 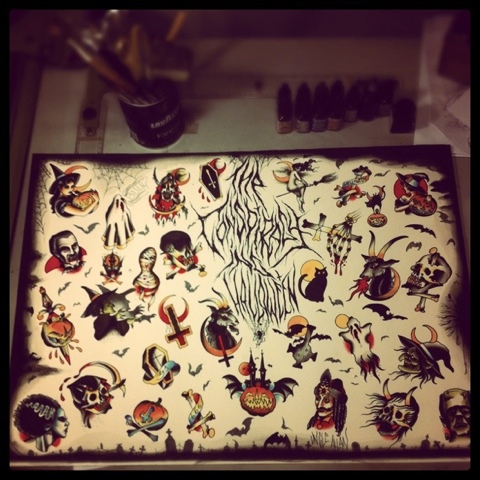 Yesterday was our second attempt to get the danish customers in gear and give them a chance to skip waiting lists and all that stuff...be spontaneous and just jump right in and get at tattoo. Well... Let's start with the concept.
As some of you know (you who follow me on twitter, here and instagram) we had a few leftovers from the London flash and since I really wanted to do some more tattoos from these pages I decided to make two days where you could skip the waiting list and get a tattoo right now. First day was previous friday. I ended up doing two tattoos witch was really good but there would have been time for a few more. Still a big thanks to Jonas and Kasper for getting a piece done. Second day was yesterday. Much better! 3 guys came from Sweden to get a piece of the action and our regular customer Ole also wanted a little something. Just like in London, everything just worked out smoothly and I had a really fun day. Thanks guys! It was awesome to work like this and actually get to do 4 cool tattoos on 1 day.
If I still sound a bit disappointed it's only because I had hoped for more people to be spontaneous and just drop by. I do feel it was a success and I had great fun both days. It just seems funny how people always complain about how impossible they think it is to get tattooed by me when really, it's not. Join the waiting list. Look on our twitter for last minute cancelations, and drop by when we have a walking day like these two days. I hope it is just a matter of getting used to this before we can make it work because I have plans about doing this at least once a month. I'm gonna build up a collection of flash that will be available on these days and where you can just drop by to get tattooed on the day. It won't be one of a kind flash like this was but I'm hoping that the collection will grow so that there will be smaller chance for repetitions. The few designs that hasn't been done from the London flash will be going into the flash archive but those designs that I have tattooed by now will not be made again. DONE!
So keep an eye out for flash walking day news later. It everything works out the firs one will be sometime in December. So remember: Walk-in...no appointments needed. No custom work, ONLY from my own flash. More info soon.
So here is what came out of the leftover days, minus one that was bleeding a bit too much to get a good picture of it. 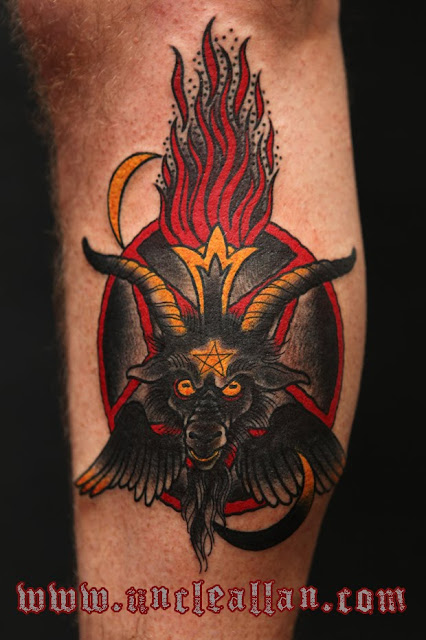 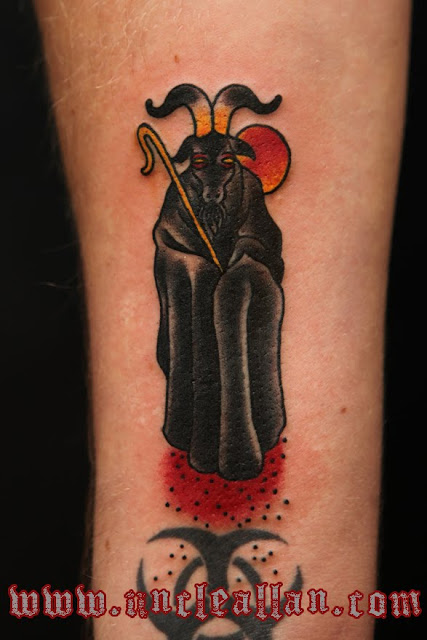 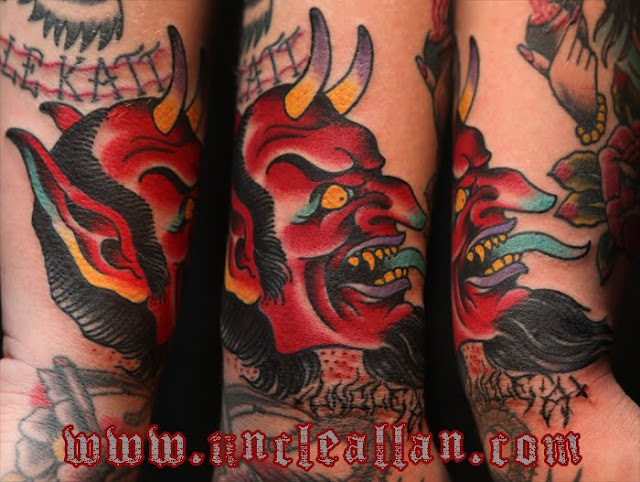 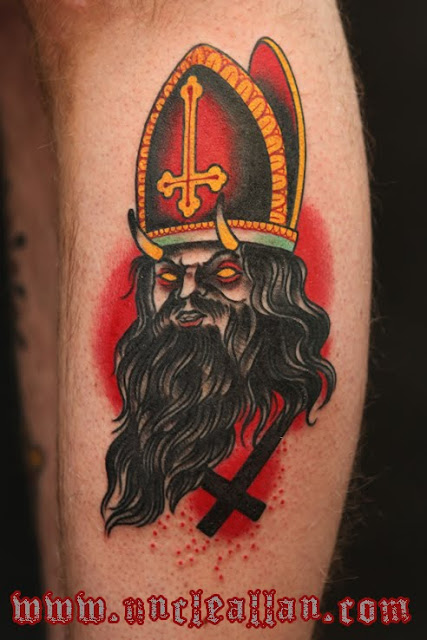 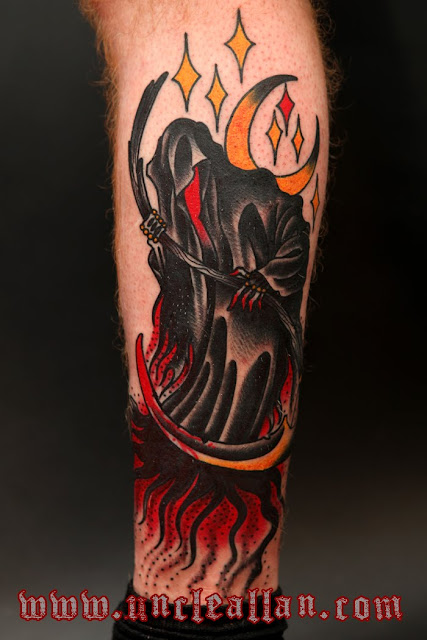 We have started our staycation that will last all of october. That however doesn't mean that I won't be working at all. Still have bills to pay and we do have a few fun projects in mind...maybe around Halloween!?!?
But first things first. As I have a few designs left-overs from the London flash that I really really want to do I have decided to have a flash sale out. This means that you will have a chance to skip the 2 years waiting list and get tattooed right now... if you would like to have any of the flash designs done that is. I'm gonna have this Friday the 7th and then Saturday the 15th of october to choose from. So if you are interested in getting one of the designs done let me know asap. Who ever comes first gets an appointment. I'm gonna try to squeeze as many in as possible since there is different sizes to choose from. I might update once in a while about what flash is left to choose from. All designs will be done only once except the King Diamond Flash. I might make prints of that so I can't promise that there won't be reproductions of that one. I will still tattoo from it if anyone wishes. So Email me if you are interested in getting something done this Friday or Saturday the 15th. You can also try your chance and drop by. If there is time left I will be doing walk-ins from the sheets as well. Anything to do more from these pages.
Email Amalie for appointments at conspiracyinctattoo@gmail.com
So here is what is left so far. 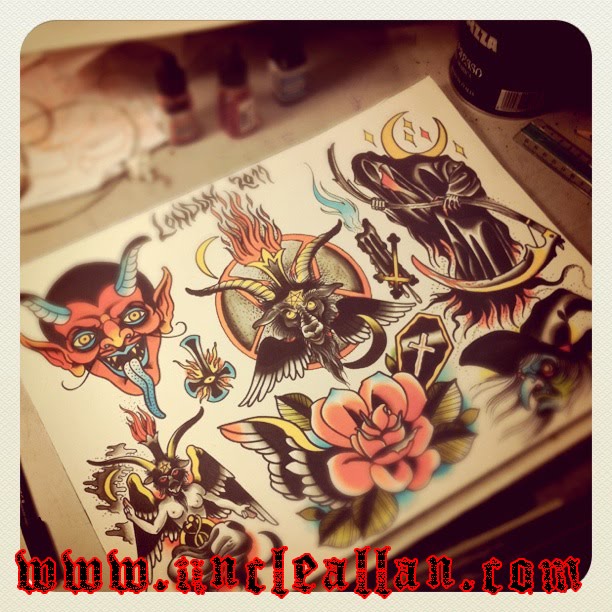 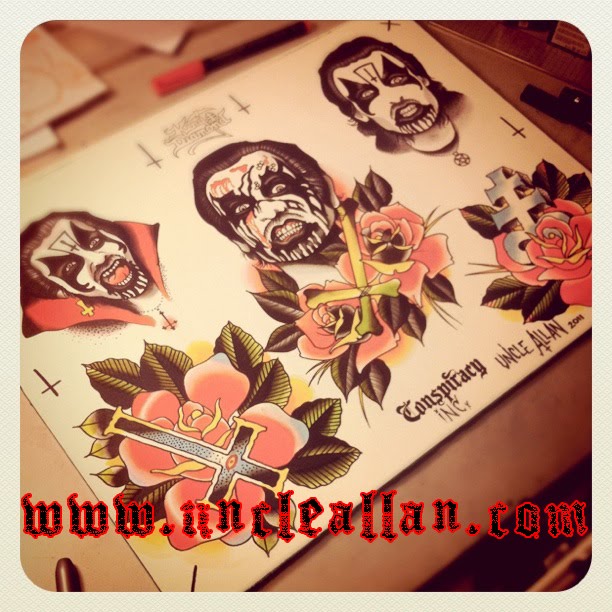 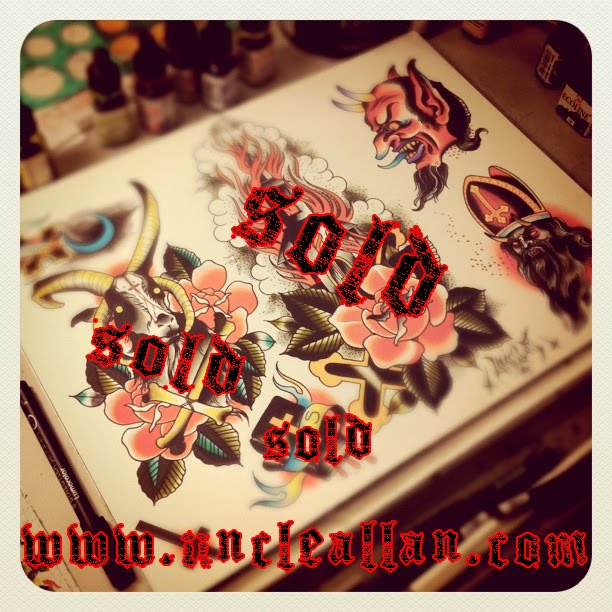 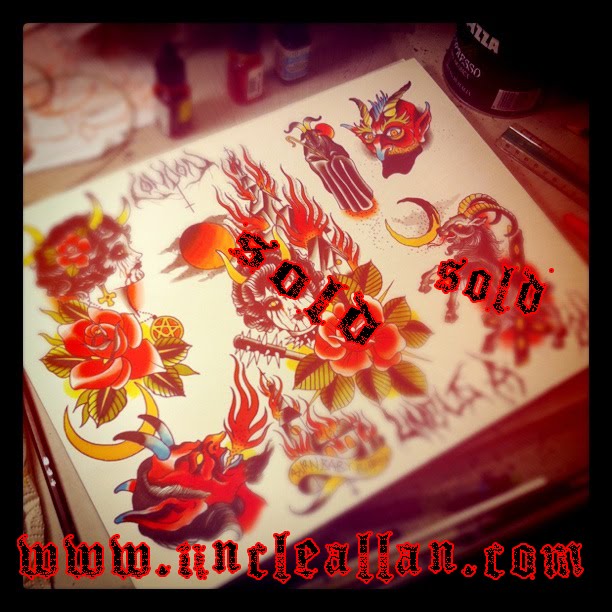 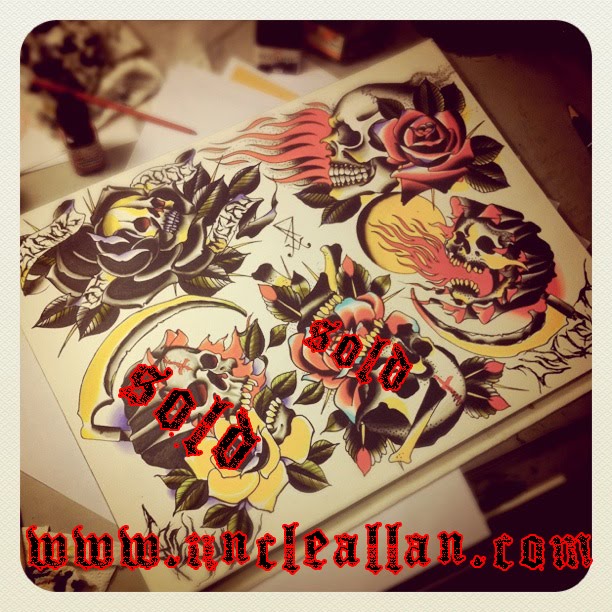 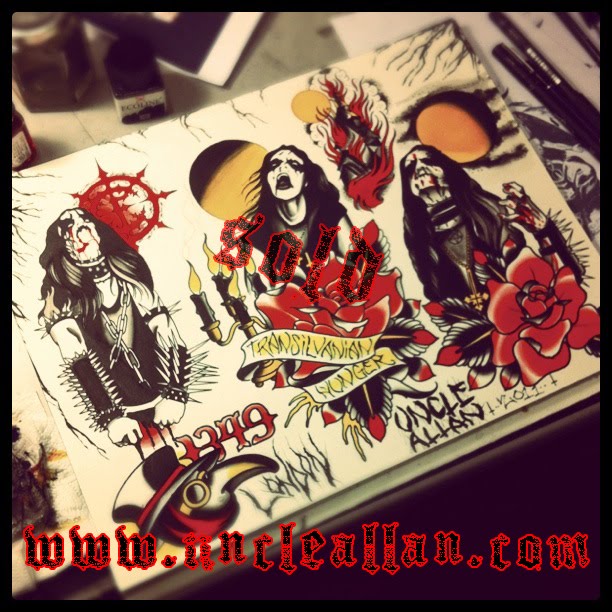 London is the reason

Here is the fruits of one of the most stressful weeks ever. As you may know if you read this blog or follow me on Instagram or twitter I had decided to make a special flash set to tattoo from at this years London Tattoo convention. As always this had to be done in the last minute which resulted in a week of no sleep and no time to hang out with my wife or anyone else for that matter. But my plan worked. The deal was that there would be no pre bookings. Who ever came first when I get there or finished a tattoo would get the next one. This part could use a bit of adjustment. It worked perfect for me as I was just tattooing non stop friday and saturday and got a small break sunday when we decided to stop the walking part after the first one as it was kinda big and they closed at 7. I do feel that there were a lot of people who might have felt that they wasted time just hanging out at my booth waiting to get a spot, all for nothing. I do wanna thank you all for the patience and the interest and I hope that you will come back and try again next year. If you were one of those who waited for nothing I would like to hear what we can do better next year. I am gonna do the same thing: make a set of flash to choose from and do the walk-in thing again. I just want to hear if there is anything we can do better so we don't waste peoples time. Write a comment if you have an idea.
A big thank you to you guys who did made it and got tattooed. Thank you for the patience and for sitting in painful positions while getting tattooed for hours!
Thank you to all the people who have shown interest in the flash set and asking for prints. There might be prints of the 2 sheets that I didn't tattoo from including the King Diamond sheet. I am looking into getting those printed but not sure yet so be patient and don't email me about them just yet. It will be up here if I go through with them.

Today is the first day of our whole month of stay-cation. I do plan on working now and then but mostly work on the tons of other things that I have started but never finished. BUT... I have this idea. I wanna do some more of the pieces from the London flash that never got done. I will find a few days in the end of october where it will be possible to get some of the designs done and skipping the loooong waiting list that I have. So if you a interested in getting a piece done from one of these sheets then stay tuned. I will announce the dates in a few days.
But here is what this post is all about...the designs that DID get tattooed at the London Convention 2011. It seams like it is impossible for me to take good pictures at the convention and that actually resulted in one tattoo missing here. Sorry Matt. 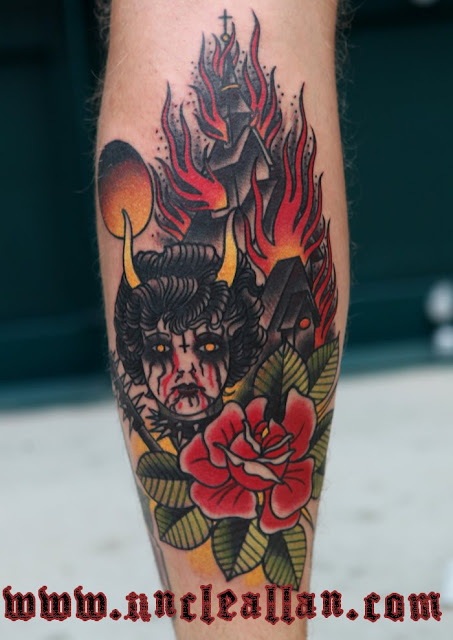 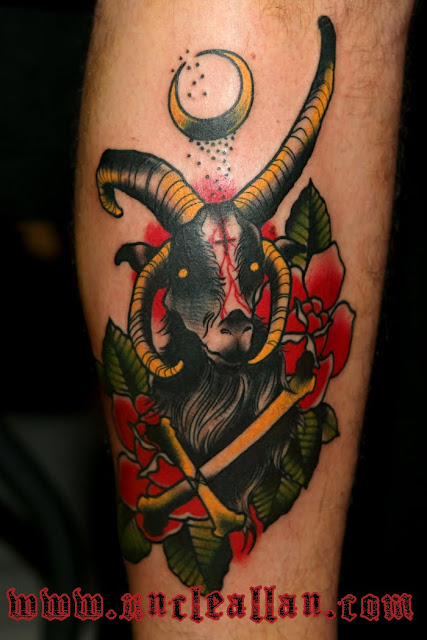 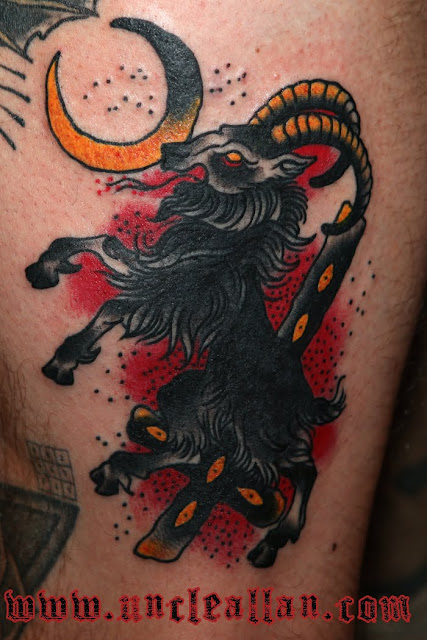 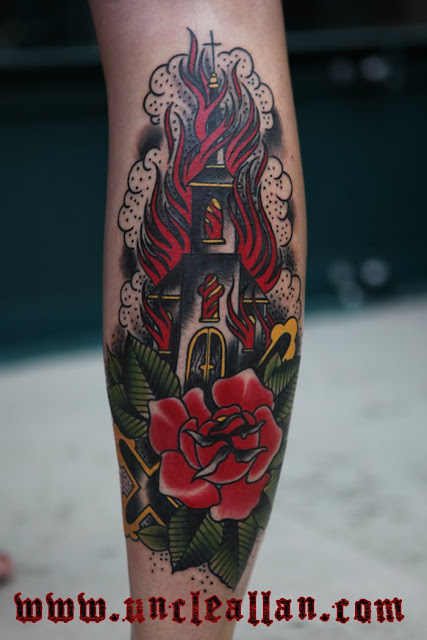 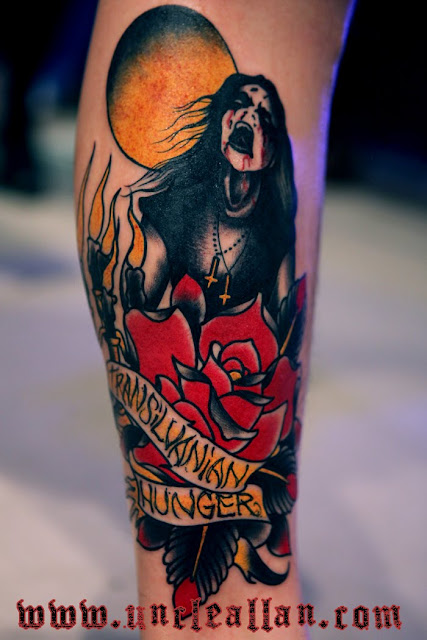 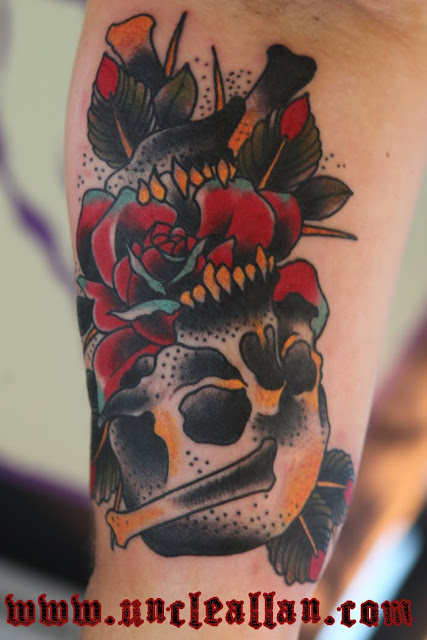 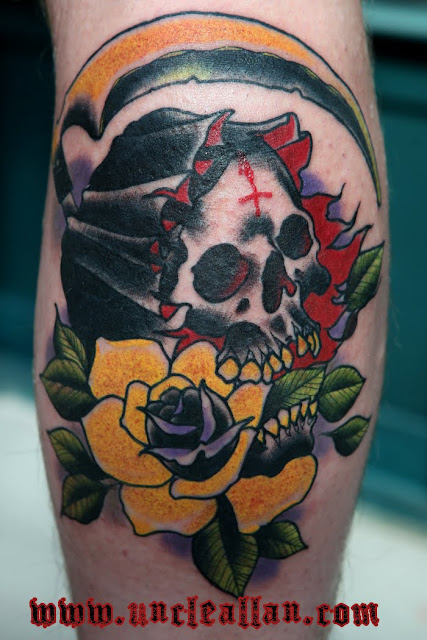