Behind the crooked cross 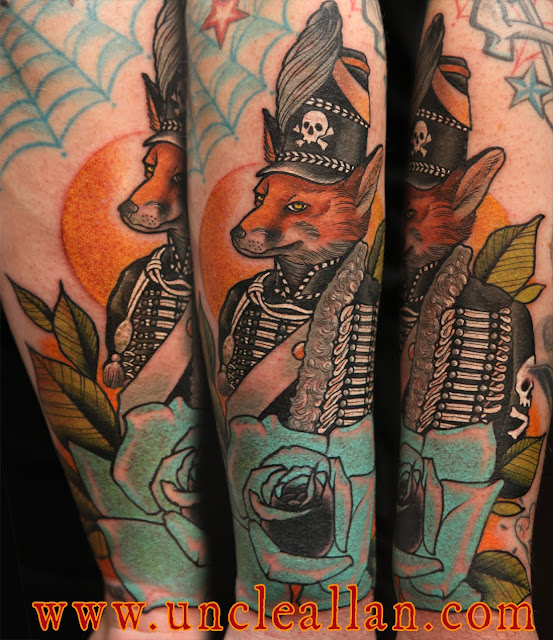 Henriette got her some swallows. One just because but the other one is with her boys name in a banner. 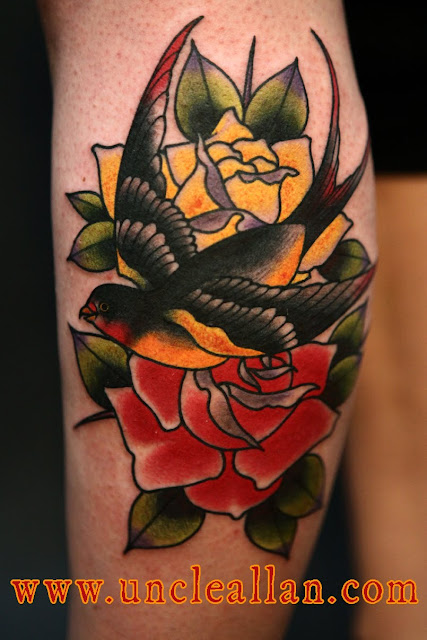 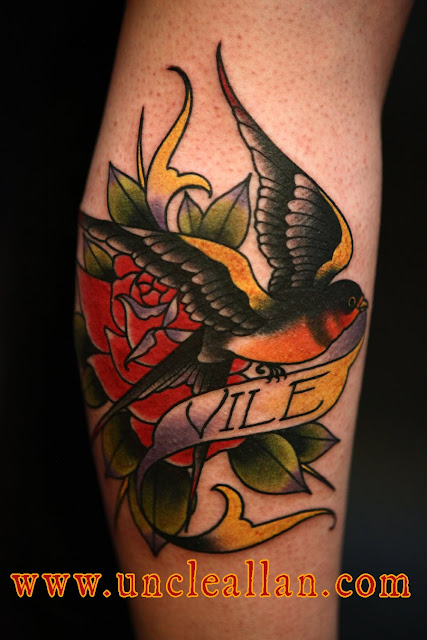 Natalie came back for two more sessions on her sleeve. This time we had two succesfull days with two finished pieces and no tears! First day we finished the lady with her birdcage in her hair. Some might think that's a strange place to put a cage but to that I say mind your own damn business! She can put it where ever she wants! 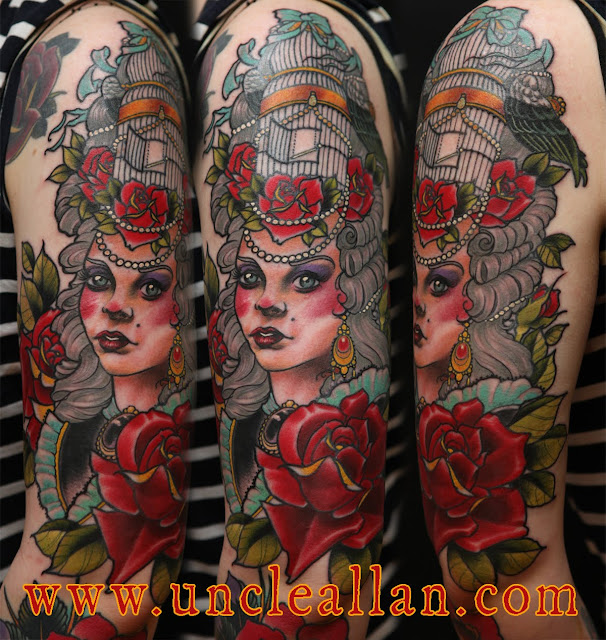 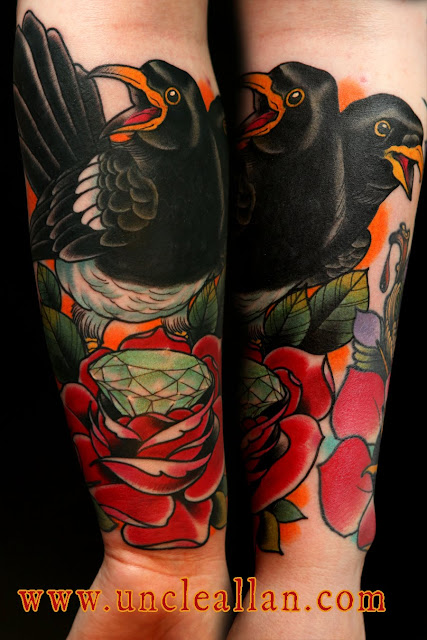 I have posted this before but here it is healed. It's on the other side of her arm. 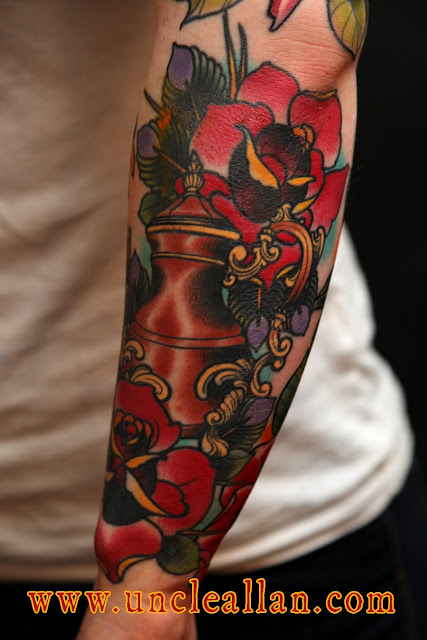 Up last we have my Norwegian homey Martin who came to finish the sleeve that started it all.
I would like to note that NO actual churches were harmed doing any of his tattoos!!
We also did a second day on hime where we did a secret project. I didn't get a good shot of it but maybe if you're lucky you can find it soon on the Conspiracy Inc blog.
Martin will also be my guide on my photo trip to Norway to get some some pictures for my Black Metal art show. 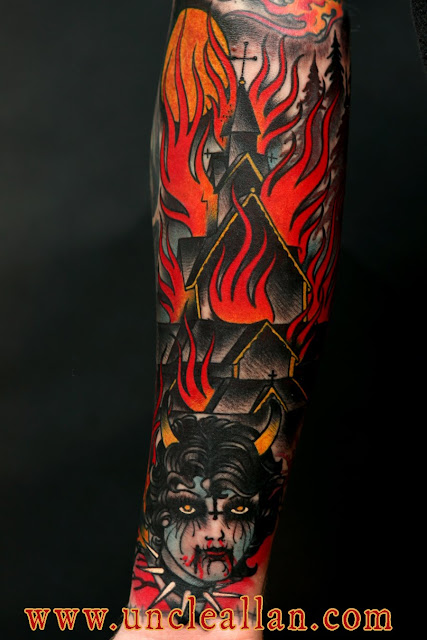 I almost forgot to tell you all about the news stuff:
I have gotten a GO for my Black Metal show. The main pieces will be the watercolor portraits that I have been working on, based on Peter Beste's book True Norwegian Black Metal but also my own photos from Norway and some more tattoo related paintings based on Black Metal. I'm looking forward to have the time to get into this subject some other day.
Have a nice sunday
Posted by Uncle Allan at 3:38 AM 8 comments:

Hello again! I'm back blogging from the computer. Not for long though since I have a Halloween post coming up with iPhone pictures of all the tattoos I did on our two day Halloween craziness.

I feel like I should have a lot to say here since it has been a while but I'm not even sure if anyone is listening anymore so until I figure that out you will just have to settle fir pictures... which I expect is what most of you readers come for anyway, Right? Do feel free to drop me a line in the comments if you miss anything here or if there is something you feel that would be interesting to see or hear about.

To make it short then here is some stuff that didn't made it in my last update so they aren't really that new to me.

I do have a few cool news before I let you go look at the pictures. We have just bought our tickets to go back to our favorite place in the world, JAPAN!!! Ohhh home sweet home. Can't wait to set foot on Japanese ground again. To see the people that we haven't seen in way too long. So we will be in Japan from the 8th to the 22nd of febuary. We don't know about work yet since we both wanna see people we haven't seen in a long time, go travel a bit and hopefully get tattooed a bit more by Shige if he can fit us in. We both feel so bad for not getting worked on for a whole year so we are excited to get on with our tattoos. But a few tattoo dates will be available so if you are interested already please send me an email soon. We are also planing on going back again in April for a month so please have that in mind as well although no dates are set just yet. Plans are beginning of April till beginning of May. More about that later on when tickets are booked. So for now lets focus on Febuary.

A small souvenir from the land of the vikings. 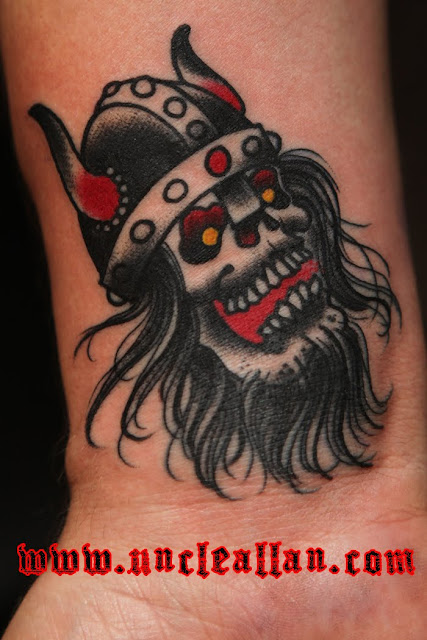 Rose sleeve all done and healed 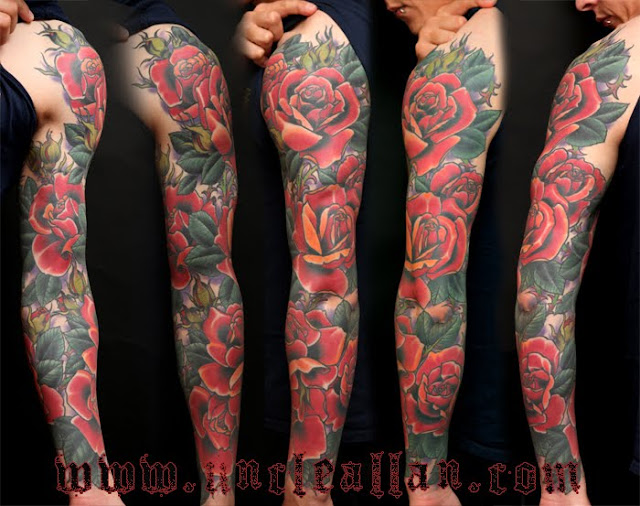 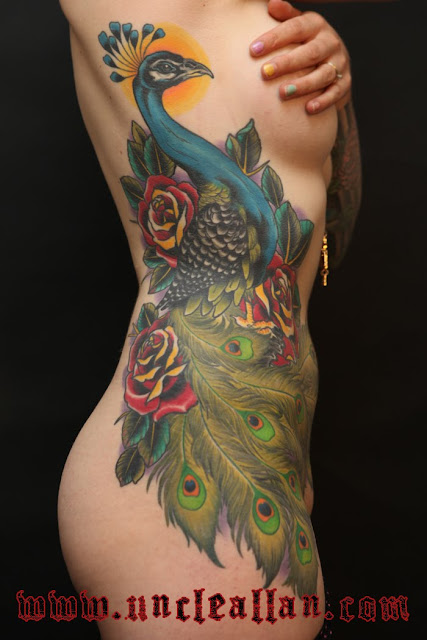 Emil got the last bit of touchup on his satanic girl 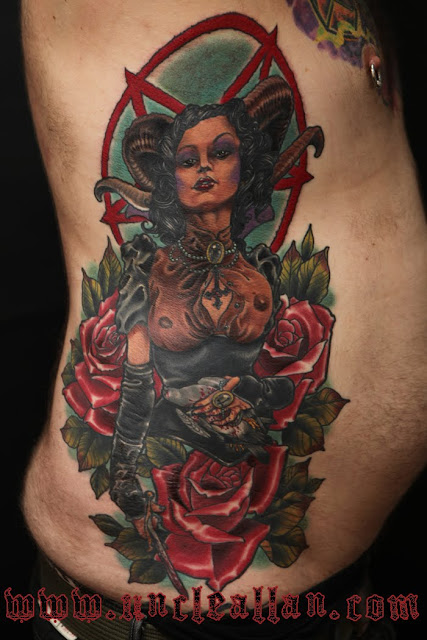 What to do with a narrow spot...dagger! 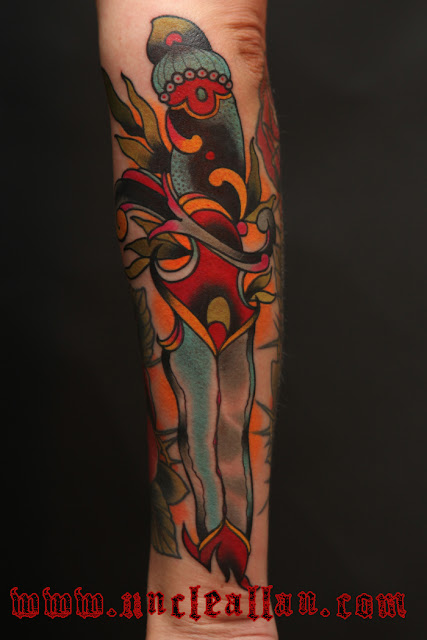