Today Matt and Steph came from the Uk for a two day tattoo party! Today we finished Stephs phone that we started last year at the London convention. All the lines and black was done so we just had to put some colour in it! It's hard to get a good picture of a fresh tattoo when the black is healed but here it is anyway...in the spirit of being back in blogging mode! 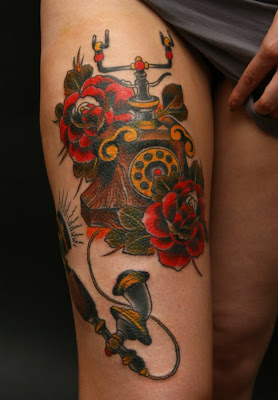 After that we touched up Matts pen that goes through his neck...not good for pictures so he doesn't get in on todays blog action but tomorrow we will start a cool piece on him so tomorrow he will be here too!!

Wow, I really dig your blog man... (never thought I would say that to a grown up man...). I link you on mine and we can be the best blog buddies forever.

Have a blog day and say blog to your blogiful wife.

Hey man !! I really dig this phone tattoo !! Could you be so kind to e-mail me a line drawing of that by tomorrow ? Thanks son !