Many things have been going on since the last time I posted but all in a nice pace.
Since we decided not to book anything, all though we weren't going to Japan after all, we have had time to enjoy things going on. We went to the Copenhagen Convention Friday to say hi to all or friends that we usually never get to see. It was nice to be at a convention without having to work. That doesn't happen too often.
Saturday we had some Family thing to go to and sunday we met With Seth Ciferri and his girlfriend Emi for brunch. Super nice people. I have only emailed with Seth and seen him a few times shortly on a convention so it was really cool to find out that he was a great guy in real life too. We had a really great time with those guys!
We went to the shop Monday to hang out and I started a really cool piece on Emi. Our friend Jime Litwalk came by with Joe Capobianco and Andy Schmidt to see the new shop. Jesper who is a great pinstriper and a customer of mine came as well since he knew them too. Our friend David also dropped by so it was a nice day of visits at the shop. We like visits. So I tattooed Emi and Seth tattooed Laurits and that was a full day. Phew.
The next day we started with some brunch with Seth, Emi and John Montgomery who kindly gave us some new inks to try out. Later Amalie and me both got tattooed by Seth and he was also kind enough to retune a machine that I bought from him a while ago. Seth has been a huuuuge inspiration to me and has been a main giant influence when it came to find a way to make roses and stuff...ok ok I stole it all... This is one of the reasons why I have wanted him to do a rose on my hand for a gizzilion years. I was so sad when he kinda stopped tattooing but stoked when I heard that he was getting back into it again.
We went out to our favorite sushi place for dinner and ended back at the shop for some final machine tuning before they had to leave. We hope to have you guys back again really soon.
So now our vacation starts. Not that many plans other than painting and a few shows here and there. I am stoked about all the time I will have for painting but I do miss taking pictures. One of the things I love about going to Japan is that I wanna photograph everything and everybody. Not so much here. I know that Copenhagen is a pretty city but it just doesn't please my viewfinding eye the same way as Japan does. Same goes for the people I see on the streets. I just don't feel the same urge to snap pictures of danish people. I might have to go out and try though, just to get my fix. I can't really think of any projects that I could do here in Denmark at the moment. Any ideas?


The print we did to help Japan is selling like crazy! We have already sold half of them in like a week. First shipment will go out today. So scroll down to the previous post and get the info on how to get a print and help Japan while we still have some prints left. They are also for sale at the shop but we don't have exact days that we will be there. If you wanna pick it up at the shop anyway you can write us about prepaying it through paypal and we will put it aside for you to pick up later. 50 left guys!
If anyone would be interested in buying the original then let me know and I will think of a way to do like an auction thing or something. Depends on the interest.


Even though I havn't worked in a while I still have an unposted picture for you guys. Can't leave you hanging without anything to look at, can I? 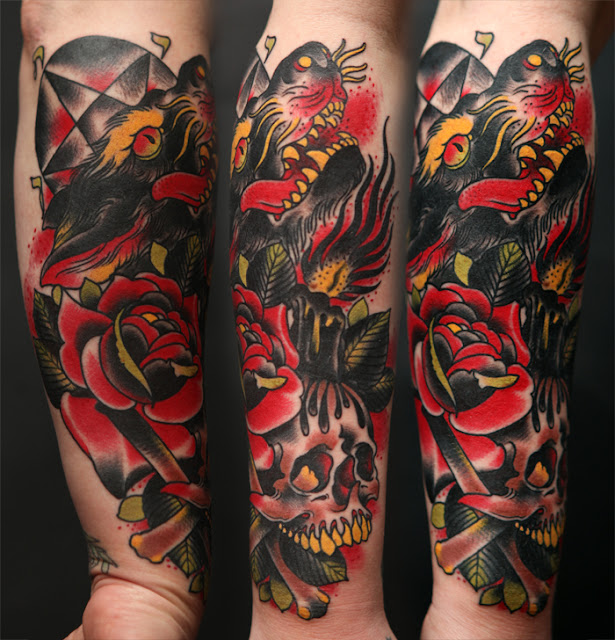 So here is the a Satanic wolf from hell! YEAH!!!
I promise to post some stuff even though I'm not gonna tattoo so much in the next couple of weeks. Other projects might pop up anyway so please stay tuned.
Posted by Uncle Allan at 3:34 AM